Connecto lets you create a game board as large as forty-two cells (7x6) and as small as nine cells (3x3). The game template provides two markers to use on the grid. Each player or team gets their own marker. The object of the game is to connect a line of cells.

To play a Connecto game you click on one of the cells in the gameboard. When you click on a cell a question appears on the screen. The player or team who answers the question correctly then gets to put their marker on that cell. If neither player or team answers correctly then the space is left unclaimed and another question can be displayed by clicking on the cell again. Questions for the game are written in the Google Sheets template provided by Flippity.

You can customize your Connecto game by writing your own questions and answers. Questions and answers can include images and videos. You can also customize the template by using your own images in place of the default game markers. To swap in your own images in place of the default markers you'll have to use images that are hosted online and publicly available. Like all Flippity game templates you have to publish your Google Sheet to the web in order for the game to work. 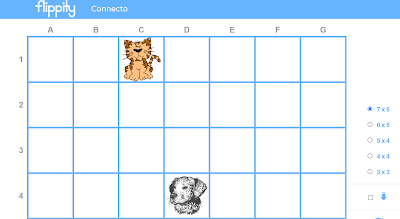 Applications for Education
Connecto appears to be intended to be played in a setting in which a teacher reads the questions aloud and officiates the game. Playing Connecto could be a fun way for a class to review before a test or quiz.

This post originally appeared on FreeTech4Teachers.com. If you see it elsewhere, it has been used without permission. Sites that steal my (Richard Byrne's) work include CloudComputin and WayBetterSite.