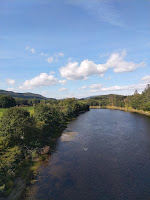 River Runner is a neat website that shows you how a drop of water travels from anywhere in the United States to the Atlantic Ocean, the Pacific Ocean, or the Gulf of Mexico. To use River Runner simply go to the site and click on any location in the United States. As soon as you click on the map, River Runner will generate and play an animation of the path that a drop of water would travel from that location to get to the ocean. You can stop the animation, rewind it, and fast forward it if you like. The animation is based on data collected from the USGS. The code for the site can be found here on GitHub.

When I was in elementary school my fourth grade teacher, Mr. Gessay, had us draw the path that water would take from our school to Long Island Sound. I'm pretty sure that related to our field trip to Rocky Neck State Park later in the year. River Runner does essentially the same thing for students. Today, I'd have students do the same thing then use River Runner to check the accuracy of the paths they draw on their maps.

Using the River Runner site reminded me of the World Wildlife Fund's Free Rivers app. WWF Free Rivers is a free augmented reality app produced by the World Wildlife Foundation. The app uses augmented reality to present a story about rivers. WWF Free Rivers tells students stories about the implications of changes in weather patterns, damming rivers, and pollution on river ecosystems. Students interact with these stories by moving their iPads and or by pinching and zooming on elements in the stories. Unlike some other AR apps the animations within WWF Free Rivers can be experienced by students from a variety of angles. A great example of this is found early in the app when students can see what a dam does to a river. During that experience students can see the dam from above, from below, and from the sides.
This post originally appeared on FreeTech4Teachers.com. If you see it elsewhere, it has been used without permission. Sites that steal my (Richard Byrne's) work include CloudComputin and WayBetterSite. Featured image captured by Richard Byrne.